SuckerPunch is proud to welcome Alienware into the sport of MMA

Amir is one of the biggest mysteries in the UFC. Winner of The Ultimate Fighter season 7 and entering the house as “the kickboxer” with zero professional MMA fights under his belt, Amir went on to finish all of his opponents in the house, mostly by submission. Now one of the most popular fighters in the UFC, all the talks is about how “his muay thai has improved?” The reality is Amir is one of the most composed in the UFC with a very well rounded game. Amir will represent Alienware when he fights Dong “The Stun Gun” Kim at UFC 114 on May 29th in Las Vegas, NV.

Possibly the best striker in the heavyweight division Pat Barry delivers some of the most powerful kicks and entertaining fights in the UFC. Pat Barry has quickly become a fan favorite who’s kicks will no only break a persons will, but they will actually break a person. Pat will represent Alienware when he faces arguably the most feared striker in the sport, Mirco CroCop, in UFC 115 on June 12th in Vancouver, BC, Canada 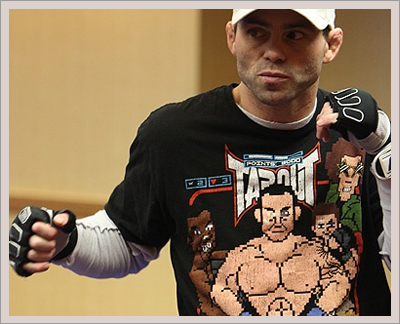 Easily one of the most popular fighters amongst the fans and a future Hall of Famer, 3X UFC champion Jens “lil Evil” Pulver will serve as the fight team captain by giving exclusive commentary, predictions and gaming insight to the Alienware team for blogs, interviews and appearances throughout the country under the Alienware brand. Already known as the most avid “PC Gamer” in the sport, Jens has always had a passion and dream to be involved with the gaming industry.
MMA WEEKLY ALIENWARE/DELL GET SUCKERPUNCHED
MIXED MARTIAL ARTS Alienware/Dell latest MMA corporate sponsor
MMA DIE HARDS Dell’s Alienware Computers testing MMA waters
MMA PAYOUT Alienware to Sponsor Mitrione, Other Suckerpunch Fighters