JEN’S GETS HIS JEEP JACKED

No it didn’t get repo’d… Jens was just nervous and sad that his prize automobile was getting taken away from him for a few weeks. 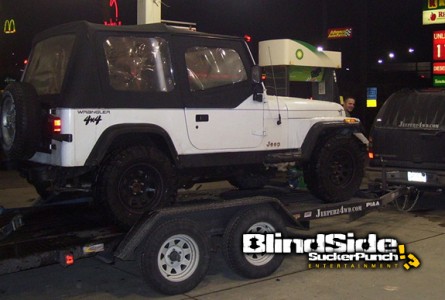 No, its not the red Roush Mustang he was given for coaching The Ultimate Fighter 5. It’s his old beat up 1994 Jeep Wrangler!?
Just a little background on Jens and his Jeep. It’s like the “project” car you had in high school that you never got rid of. So when we were approached by the team at Jeeperz 4WD to hijack Pulver’s Jeep and give it an overhaul we thought Jens would flip out. The caveat to the deal is that he has no say in what they are gonna do to it. Jens was actually a little hesitant. He said Visions of “Pimp my Ride” were flashing through his head and he thought “oh god please don’t let it come back with a disco ball, fish tank and spinners.
The folks at Jeeperz 4WD seem to be pretty confident in their abilities and don’t seem to be worried that they have taken the prize possession of a slightly temperamental cage fighter… and will have to personally deliver it back to him for the unveiling.
Actually what are we talking about?? We set this deal up! Jeeperz 4WD,
PA-LEASEEE don’t mess this up!!!
Keep checking back as we will be posting updates to this story and the unveiling when it gets delivered back to Jens.