THE BIG FROG IN A LITTLE POND 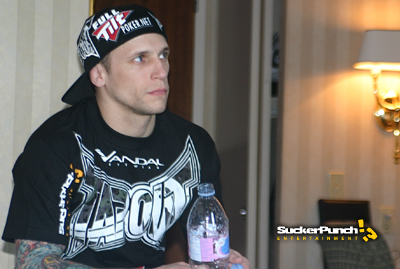 Is he a contender at Bantamweight? He has lost two in a row, does he really think he can win a belt? Jeff sat down with us and told us why he believes this is his time.
You’re just back from Corpus Christi where you were cornering Bart Palaszewski, tell us a bit about that trip.
Well it would have been better if Bart won! He’ll be back though, Bart is way too good to be down for long. I tell you what I did get from that trip though… The fan base is getting bigger and bigger, this sport is blowing up! I’m in Corpus Christi, TX and more people recognized me on this trip than ever before. 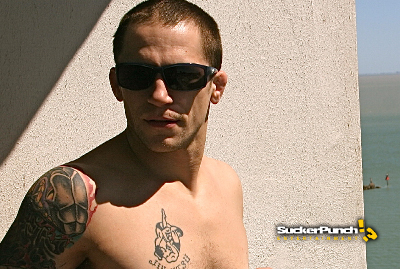 Enjoying a break from the Chicago winter on the deck of his room in Corpus Christi
At the weigh-ins you held a Q&A with Faber that was hosted by fellow SuckerPunch fighter Jens Pulver. Tell us a little about that.
Yeah, it was pretty cool, I was amazed at how many fans were there to just hear us talk! Jens did a great job and I think even though it went long the fans were into it.
What were some of the funnier moments in that Q&A?
Haha, well there were a couple moments, one that comes to mind was when we were asked who our toughest training partners are and Faber grabs the mic and says Joseph Benavidez is one of his toughest… 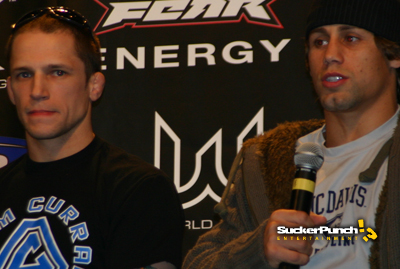 I chimed in on Faber and said, “Is that supposed to intimidate me? ooooh Benavides I’m scared…”, which got a big laugh out of the crowd and Faber.

You also mentioned a potential fight with Torres, is that heating up?
Well I have the utmost respect for Miguel, but the truth of the matter is I’m not dropping down to 135 to make a lateral move… he is at the top and Im gunning for him or whoever has the belt at the time I get my shot.
You said in the Q&A “Miguel has nothing for me”?
Well that is because I am supremely confident in myself and my camp. I hear so many people count me out of this fight so I’m just laying it out how i see it. Like Faber said if you don’t believe in yourself as the best then you shouldn’t be in this business. I still consider myself a threat at 145lbs and I think most people, fighters included, will agree with that. Why would you think I wouldn’t be an even bigger threat by facing even smaller guys? So I’m gonna do what I said and that is go to 135 and kick Miguel’s ass and take my belt. Im sure he is saying, “I’m going to kick Jeff’s ass and keep my belt”, so hopefully we’ll find out but I’m not looking past Benavides at this point. 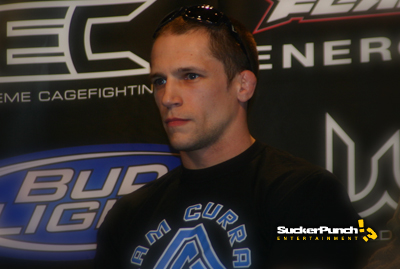 With Mike Brown tearing up the featherweight division do you think that boosts your stock?
Well I hope people would recognize that I took Brown into deep water and he won a close decision over me. Frank Mir even said he would have hated to be a judge in that fight. For me, yes I have 2 losses but look who they were against and look how those fights went. Faber was in real trouble and Brown could not stand with me. Hats off to both those guys though, I have become friends with both and have a high level of respect for them.
So what’s it gonna be like fighting in your hometown on April 5th?
It’s going to be great! I am very excited about the support I am getting and hope that if all goes well for me and Miguel we can do it here again for the title. I see the big billboard in front of O’Hare with Miguel and me on it and I really think that this could be the biggest MMA show in Chicago’s history.
There is nothing like seeing these fights live and Chicago fans are the best! I am hoping Chicago shows up in force on April 5th and show the WEC that Chicago is a relevant spot to put these shows on! I want to fight at home when I go after the belt so come out guys I need you!
Tell us about some of the things you have been doing leading up to this fight that show the hometown fans are behind you.
Well I just did a celebrity field goal kick at the Chicago Slaughter football game… which I sucked at, shanked the ball. I’ll stick to kicking people. It was good though I signed autographs for several hours and people were telling me they were not going to miss the fights.
On April 1st I will be doing the celebrity puck shoot out at the Chicago Black Hawks game during intermission so hopefully that will go better since I used to play a lot of hockey when I was younger. We will be doing a meet and greet there as well as a WEC ticket giveaway to some lucky fans in attendance that night. So if you’re able to make it out that night come and watch me try and not make a fool of myself.
You’re a family man and we’re sure they are excited to have this in Chicago right?
Yes, its great to be able to have it here and not have to travel. My wife as always is the most supportive person on the planet and with our new boy she has had her hands full while I’ve been training for this opportunity. I’m doing this for myself and my family… It’s do or die time and for me and moving down to bantamweight where i can be the big fish/frog in a little pond for the first time in my career.

Any after party festivities we should know about?
Yes, my party will be hosted at SPYBAR so be sure to come out and have a drink with me after the fights! My friends at Windy City Martial Arts is pickin up the bar tab from 10PM to 11PM so head over right after the fight and take advantage of that. It’s a really cool spot and I look forward to meeting all of you there. 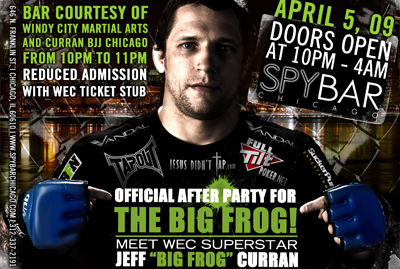