EVERY FROG HAS IT’S DAY

After watching the WEC fights Wednesday night, Jeff “Big Frog” Curran gives us a raw interview about where he is in his career and where he sees it going.

What’s going through your mind when you see Mike Brown, the guy you last fought and took to a very tough decision, defeat Urijah Faber at 2:23 in the first round, the guy you arguably gave the most trouble to until this fight?
Its funny you ask this question because I was arguing with one of my students the day of their fight about how I felt Brown had all the tools to beat Urijah. Now, don’t get me wrong, I definitely feel Urijah had the tools to beat Brown too, but after fighting Brown and Urijah I felt Brown was strong enough to control him and he hits hard if he lands a shot. So that’s my breakdown of the fight, but before it took place I was simply anxious to see the result. Many people feel I beat Mike Brown and after watching the fight myself a number of times I can see where I may have squeeked past him in some way. When I fought Urijah I was way relaxed, like I am when I train with my students. 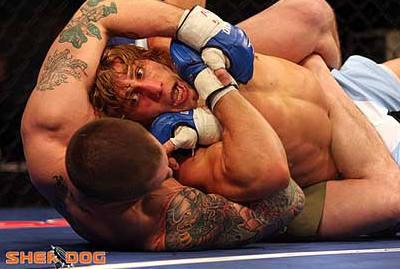 Nobody ever seems to mention me taking him down, passing his guard, mounting him then taking his back? Its funny how the commentators and his fans looked past that part of the fight. I lost that fight to a simple mistake. I have always been taught to let submissions fall into my lap as a result of their mistakes. I lost sight of the fact that I should have punished him when i had mount or his back then take the neck. What can i say, even monkeys fall from trees. That was my first time ever being caught in a submission in over 60 mma fights. As for Brown, I really wish I just kept it standing. I have a habit of sitting against the fence. Being the strong wrestler he is he was able to take me down. Allthough I was fine on the ground it never looks good to the judges. To sum it up, after watching that fight it just fired me up. I know in my heart my team and fans know that i am still a top contender in 145 and should be considered a huge threat to anyone I fight.
Even though you have been ranked in the top 5 in the world in the featherweight division for some time now, do you feel you get the respect you deserve?
I feel that certain people dont respect me, and thats fine, but overall I have more respect than those that dont respect me may know. If that makes any sense. I am a mainstay in this sport. Sure, I lost to Urijah, I lost to Brown, whatever. Bottom line is if you stay consistant in this sport like I am things have a funny way to balance themselves out for you. I never got into this sport for money. I didn’t get into this sport for fame. I got into this sport to represent Gracie Jiu-Jitsu and my instructors like Pedro Sauer, Frank Cucci, Doug Mango to name a few. I know more than anyone that respect is earned, not given. People that stare at results may see a few key losses, but I see some of the best lessons a guy can ask for in their career. I have won fights that went as close as Mike Brown’s fight with me, I have lost fights where I thought I had won. Bottom line is this: When you fight guys like Matt Serra, Kid Yamamoto, Urijah Faber, Mike Brown etc. it has a funny way of showing who belongs and who doesn’t. Serra, now 3 weight classes over me, couldn’t finish me off or even come close. Yamamoto had his toughest round with me in round 3 and i finished strong. Urijah….he had his luckiest day of his life with me. Brown? Well Brown had won a grind out battle with me and I steared from strategy which cost me the close loss. Respect? Hell yeah I have respect and for anyone who doesn’t respect me all I can say is good for you. I am confident in who i am as a fighter.
They announced you dropping to the bantamweight division tonight on WEC, how do you see that playing out?
I see myself taking these guys at 135 into deep waters. They have no chance with me. Not many fighters at 145 have a chance with me. I am strong at 135, I make the weight easy and nobody in the division has a technical edge on me at all. I will be the new champion in that division soon enough. That’s a promise.
Everyone wants to see you fight Miguel Torres for the WEC bantamweight title and a lot of people seem to count you out of this fight. Some say he will out strike you and some say he will sub you if it goes to the ground. What do you have to say about that? 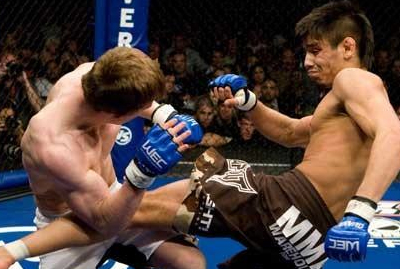 Of course. Not sure when, but in between the rain drops. I did a black belt gi match earlier this year which was great. I won 6-4. When I retire from fighting I plan to compete in BJJ until my body doesn’t let me. My boys will hopefully be by my side.
If you could just draw up the next two years, what would it look like?
First 6 months earning my spot at a world title against Torres. Last year and a half will be defending it and hopfully making a huge positive impact on the WEC fans and the MMA community.
You’re a family guy and have a second child on the way, tell us how a week in the life at the Currans goes and how do you make time to unplug from work and training?
I don’t really unplug from work or training. For the most part I wake up at 7am, make way to the gym and begin my day. Around 9pm I head home. If my son is up late I see him before bed. If not I see him on weekends. I try to give my wife 1 or 2 days a week where I let her sleep in an extra hour or so and I play with my son Ty before work. She tries to visit me at the gym once a week too. He loves coming to “Dada Skool” to play on the mats etc. At home I am on the computer or phone by my side. She makes dinner based around my diet required at the time and I don’t even have time to cut the grass. My father-in-law helps with that thank God. 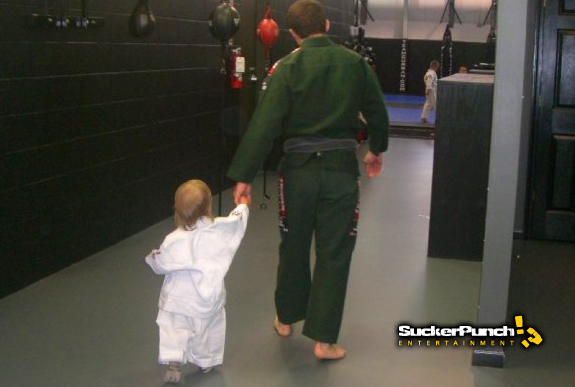 Sounds like you have a very tollerant wife? Anything you would like to say to her while we set you up with this softball?;)
Man, Sarah puts up with too much with me. She could have called it quits on me years ago but she loves me and believes in me. Without her support my life would be a disaster. Family, what little time i have with the, is my balance from the hectic whirlwind of my life. Even when I diet she is there to deal with me during my mood changes and my picky little ways. But, she is not a pushover. She is the boss of the house for the most part but she doesn’t abuse that role at all. We have a very healthy relationship.
Now we want to ask your opinion on some “What If’s” for the fun of it.
1. Fedor VS. Anderson Silva
Silva, cuz Fedor couldn’t catch him
2. GSP VS. Anderson Silva
Silva, too sharp
3. BJ VS. Anderson Silva
BJ if he took him down, but doubt it
4. Houston Alexander VS. Kimbo
who cares
5. Amir Sadollah VS. Nick Catone
Sadollah
6. Kid Yamamoto VS. Urijah
Kid, not sure how
7. BJ VS. Urijah
BJ
8. Rampage VS. Anderson Silva
Silva
9. Kid Yamamoto VS. BJ
BJ, size difference
10. Of course the likely hood of some of these is slim to none which one would you like to see most?
I would like to see Urijah vs Kid
11. Do you have a fantasy fight that we haven’t listed that you would like to see?
Varner vs Palaszewski
12. Any closing remarks for your fans and sponsors?
A special thanks to my boys at TapouT for all their support, Fairtex as well. Thanks to Suckerpunch for taking the time to ask my thoughts. A thanks to WEC and my management team across the board. A special thanks to my friends and family who always support me and for all the students of Team Curran for trusting me and our staff in our leadership.