BIG WINS AT AOF IN FLORIDA

SuckerPunch fighters showed up in force in Sarasota Florida this passed weekend as Art Of Fighting put on a great show for the nearly sold out Robarts arena. The card was stacked with Florida natives from some of the top camps in the country.
SuckerPunch fighters Francois “Bang Bang” Ambang, Levon “The Maynman” Manynard, Zach “The Groundhog” Davis and Anthony “Antmo” Morrison were definitely in hostile territory going into these fights… and the opponents knew we were coming.
The night started with Francois “Bang Bang” Ambang making his MMA debut against American Top Team fighter Mackenzie Briggs. Ambang came out and immediately laid leather to Briggs who quickly realized he did not want to stand with Ambang. All Briggs could do to save himself was to tie Ambang up on the cage and hold on for life. Ambang looked for every opportunity to strike and when he could get an opening he threw with bad intentions cutting Briggs open. Late in the third round the ref took a point away from Ambang for “holding” the shorts but gave no warning that anyone could see. That point caused the fight to end in a draw, but we know who won that fight.
Up next for SuckerPunch was Anthony Morrison. Morrison faced American Top Team fighter and BJJ black belt Fabio Mello. The fight started at a fast pace with Fabio throwing leg kicks and looking like he was going to try and stand with Morrison. Morrison quickly answered back with thunderous legs kicks and an overhand right which stunned Mello. Mello realized that Morrison was not the fighter he had studied on video and shot for the take down. Morrison was able to sweep Mello but got caught in a guillotine and the fight ended. Was a hard fought fight and was shaping up to be a very exciting bout. Mello told us after the match, “My BJJ saved me”. 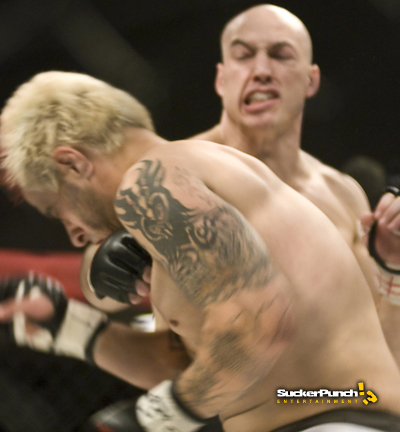 Photo’s provided by Mo Lelii
Phillip “The Wicked” Wyman was up next and faced Team Trauma star Carlos “The Rooster” Gonzalez. The crowd was into this one which started fast with Carlos coming out and putting heavy pressure on Phillip . Staying very composed and counter striking Phillip was able to land the heavier strikes which forced Carlos to go for the take down. Phillip ended up on his back and was going for a triangle while Carlos continued to throw down punches. Phillip pulled a nice transition from triangle to armbar and forced Carlos to tap out earning him runner up for submission of the night. 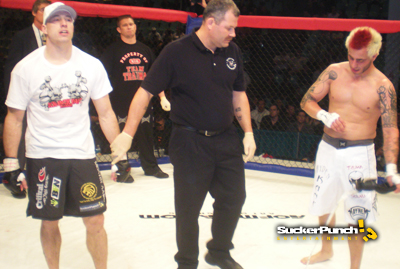 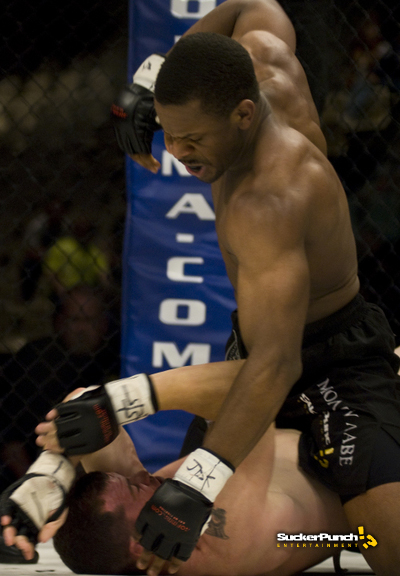 Photo’s provided by Mo Lelii
After an intermission it was time to get it going with a fight that had all the markings for a main event, Levon “The Maynman” Maynard vs. former IFL fighter Travis “The Bulldog” Cox. Cox burst out of the corner and charged at Maynard with a superman punch which Maynard avoided. Levon then clinched Cox and pressed him against the cage trading heavy punches and elbows before taking him to the ground hard. Maynard established control on the ground with ease and was able to get to a full mount position on Cox. At that point it was just a matter of time as Maynard rained down very heavy elbows and strikes forcing the ref to step in and save Cox who suffered a broken arm as a result of the fight. 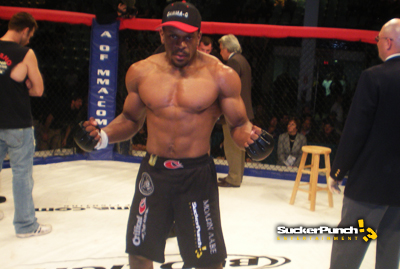 The co-main event of the night was to be Zach “The Groundhog” Davis vs. Sarasota’s own Nyantu Bolo. Bolo, a former body builder, was a very imposing looking fighter and was the heavy favorite in this bout. Zach entered the cage to some boos and played it up by gesturing his hands to each ear ala Hulk Hogan. Bolo on the other hand came out to a thunderous ovation from the crowed who was obviously there to support the local hero. As the fight started Zach was able to utilize his reach and keep Bolo at bay. Zach continued to frustrate Bolo with strikes and was able to rock Bolo a few times. Obviously frustrated, Bolo began taunting with gestures signaling that Zach was not, or could not hurt him. This continued into the third round until Zach decided enough was enough and shot in to take him down where he could utilize his BJJ purple belt. After getting Bolo down Zach started dropping the leather and KO’d Bolo earning Zach the KO of the night bonus and the admiration of the Sarasota fans.

All in all the fans and competitors in Florida showed a great amount of respect and the Art of War was a well run promotion. We look forward to having our guys back with them, stay tuned.
We would like to recognize Jesus Didn’t Tap and Gamma-O, Knockout Brand Clothing, Critical and BFN for taking the chance and supporting the rising stars in the SuckerPunch stable. Through supporting tomorrow’s stars sponsors like them truly help evolve this sport.