CURRAN WINS BY TKO AT 135lbs

Jeff “Big Frog” Curran won a pro boxing fight against the very game boxer, Miguel Angel Figueroa on Friday night. When Curran entered the ring photographer Tom Barnes said that he leaned over to his colleague saying, “watch this MMA guy go out and just blow his energy trying to be to aggressive”. Thinking he had MMA fighters and Curran pinned, Tom later changed his tune when he saw Curran go out and technically pick apart his opponent. Knocking him down 3 times in the first round Curran controlled the pace of the fight all the way to the TKO stoppage in the early in the 3rd. 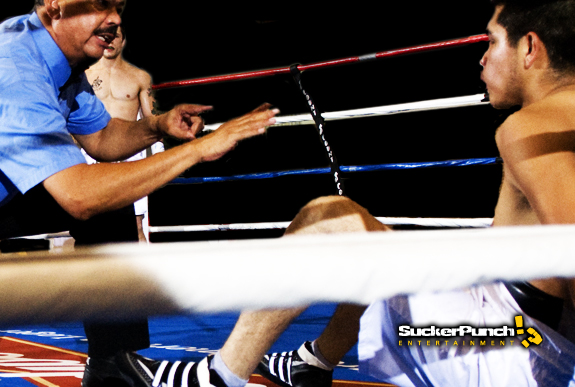 Bart Palaszewski was in Currans corner and told us,”Jeffy looked sharp, completely overwhelmed his opponent and did not gas one bit, he kept the pressure on and just did not stop!”

Curran took this fight as a part of his test cut to see how his strength, speed and stamina would be at this new weight. If last nights performance is a sign of how strong Curran will be at his new weight then WEC and the 135lb division should take notice. Curran says he is more focused than he has ever been in his entire career and is gunning for that title.