PETTIS OFF CARD DUE TO HAND FRACTURE
Check back as we will continue to update you on when “Showtime” will be stepping back into the cage. 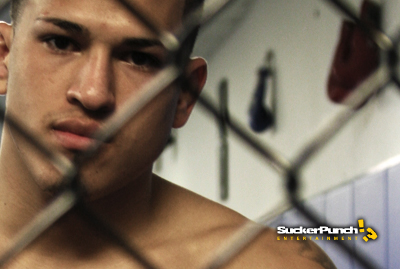 Pettis is another athlete to come out of Roufusport Gym in Milwaukee where Duke Roufus trains fighters such as UFC veteran Eric “Red” Schafer, and UFC newest bomber Patrick “HD” Barry.
Pettis is known to be a very technical and explosive striker but has won nearly half of is undefeated record by submission showing a well rounded game.
Pettis’s most notable victory is against WEC and TapouT show veteran Sherron “Rob Roy” Leggett who managed to take Pettis to his only decision victory. When we asked Anthony if he was ready to step up to the big leagues he simply answered, “it’s almost showtime”.
We would like to recognize Clinch Gear, PerformanceMMA, FIGHT! for taking the chance and supporting the rising stars in the SuckerPunch stable. Through supporting tomorrow’s stars sponsors like them truly help evolve this sport.