TOUGH DAY AT THE TUF9 TRYOUTS 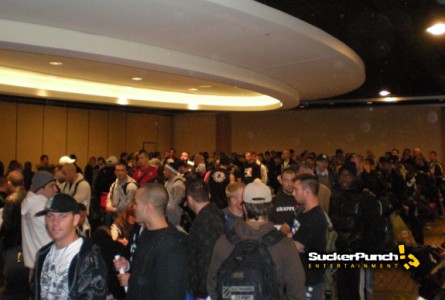 A record number of applicants turned out at the Crown Plaza in Chicago on Monday to tryout for the 9th season of The Ultimate Fighter. There were nearly 800 applicants which would make for a very long day.

Levon “The Maynman” Maynard
The best unsigned lightweight and welterweight fighters in the country showed up to compete. It was great to see how SuckerPunch fighters stacked up. 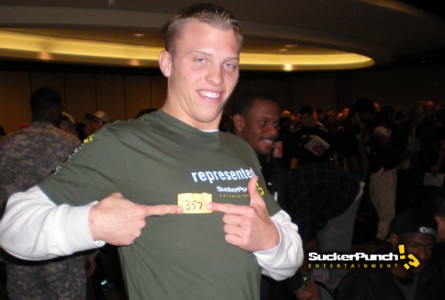 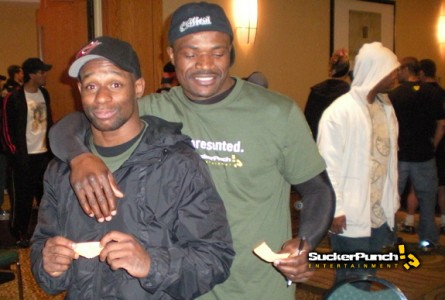 Mike Stumpf and Patrick “Paddy Mike” Curran with “Big Frog” on the side
All the SP fighters set up camp at Jeff Curran’s state of the art gym a few days before the tryouts. It was like Curran had a TUF house of his own with 6 signed SP fighters and 1 prospect sleeping in the the dorms on the second floor of Curran’s academy. It was interesting to see how the SP fighters from different camps mixed living together in the gym. Curran was extremely excited when he saw the hunger and drive these athletes had. Some had driven 14 hours to be there. 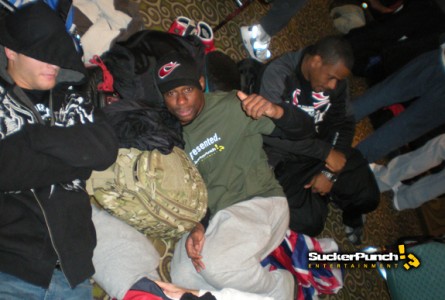 The tryouts were a hurry up and register then sit around and wait game. After registering, the fighters grabbed a nap while they waited for the first elimination round. Grappling was first and each athlete was randomly matched up with another applicant in their weight class for a one minute round of grappling. Talk about a high pace! With only 1 minute to show you can control and dominate at this level, fighters were going for broke! 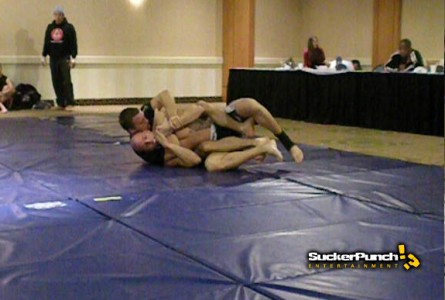 The second round was stand up/striking. If you made it past the first round, you got wait another several hours for all the rest of the 700+ applicants to have their 1 minute grappling bout. The striking round consisted of fighters hitting pads with a provided pad holder or you could bring your own out on the floor. 4 fighters at a time started working various strikes in the center of the ballroom while the UFC’s Joe Silva walked around with a producer whispering “yes” or “no” into the producers’ ears.

By the time the striking round was over we estimated the nearly 800 applicants was cut down to around 100. All that was left now was the interview process and nobody knows how this went. It was now nearly 1 AM and everone was ready to get out of there including the judges. All in all the UFC did a great job handling the crowd and it looks like it will be a very interesting season.

As for how far the SuckerPunch guys made it at the tryouts, we can’t say… but next season looks like it will be explosive. Stay tuned!
SPECIAL THANKS TO TODD GIMION AND MIKE BATANGA FOR DRIVING THE GUYS AND MAKING THE TRIP POSSIBLE FOR THEM.