On Tuesday June 24, Amir made his trek home fromVegas after winning the Ultimate Finale on Spike TV Saturday. To Sadollah’s surprise, the guys over at Colonial Harley-Davidson stepped up and arranged for a stretch Hummer to pick Sadollah up at the airport and bring him back to his home camp at Combat Sports Center where fans, media and teamates had gathered to welcome him home. 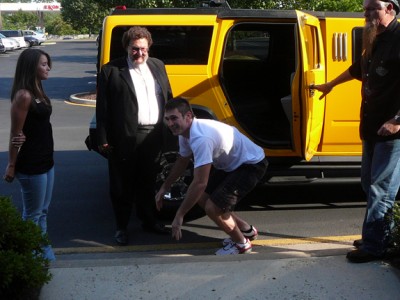 Sadollah “flopped” out of the limo, which raised laughter from the audience, and stood in surprise at the welcoming. Joe Silva, being a native Richmonder himself was in attendance as well, “I am very proud of Amir for not only getting on the show but to win the whole thing! He did Richmond proud” Silva said to the NBC news team.

Sadollah was a bit beside himself, still getting used to the instant fame and overnight change in his life. Seeing how many kids were there to meet Amir and get his autograph only tells us how far-reaching this sport has become. Brian Butler, Sadollah’s agent said, “It’s great to see the mindset of people changing as guys like Amir get into the spotlight. People can no longer say that these guys are all uneducated thugs, I mean look around, we have parents here asking if they can have their kids’ picture taken with him and a group of housewives who watched every episode wanting their photos taken with him, it’s great!”. 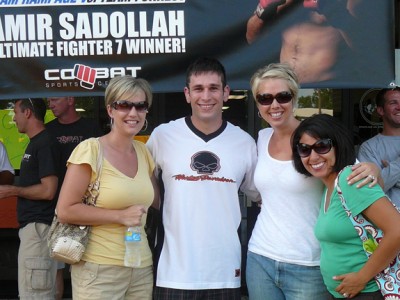 When asked what’s next for Sadollah he said, “Im going to visit with my family and friends for the week then I’ll head back out to Vegas for Forrest’s fight, then hopefully come back home for a while and see what’s up.” 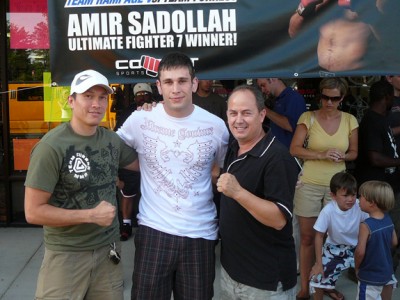 It was obvious from the turn out that Richmond is very proud of Amir and is looking forward to watching his career take off in the UFC.