Schafer wins big in UFC 93 as he pounds out Antonio Mendes in the first round.
Here is the play by play courtesy of MMAweekly.com
R1 – Both men circle. Mendes opens with a low kick and Schafer clinches him on the fence before pulling him into half guard. Schafer reverses nicely to take top position in the half guard and looks to work Mendes’ right arm. mendes turns to his side and Schafer throws in shoulder butts to boos from the crowd. Schafer takes full mount with his right arm behind Mendes’ head. He postures up with Mendes’ neck up on the fence and throws some punches, exciting the crowd. Mendes is defending desperately, keeping his head close to Schafer. He begins trying to turn away, with his legs flat on the mat and eats a number of short punches with no attempt at defense. Finally the referee stops the fight at 3:35 of Rd 1 by TKO (strikes). 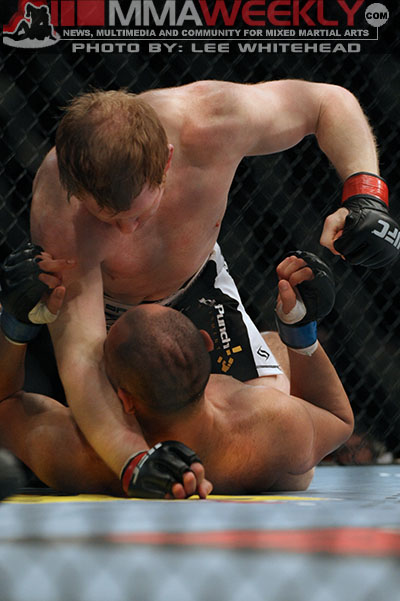 Photo also courtesy of MMAweekly.com
Schafer’s UFC stock is on the rise as this marks his second win in a row against very tough opponents. With first round wins over Houston Alexander via submission and now Antonio Mendes via TKO, Schafer is showing his growth as a well rounded fighter and should be on the radar of a lot of the top talent in the stacked light heavyweight division. 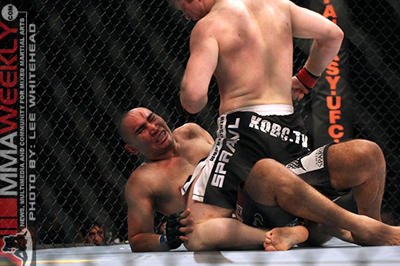 Schafer was on the card with fellow Suckerpunch Fighter Nate Mohr. Mohr came out strong and after winning the first two rounds, Mohr was on his way to winning a decision when he took a well placed heal kick to the liver which put him down and the ref stepped in to stop the bout at 3:47 into the 3rd round. This was a good fight with a lot of action so we hope to see Nate back in action again soon.
We would like to recognize Sprawl, TapouT, DynaPep, Knockout Brand Clothing and Gamma-O for supporting the stars in the SuckerPunch stable. It’s sponsors like these that truly help evolve this sport.